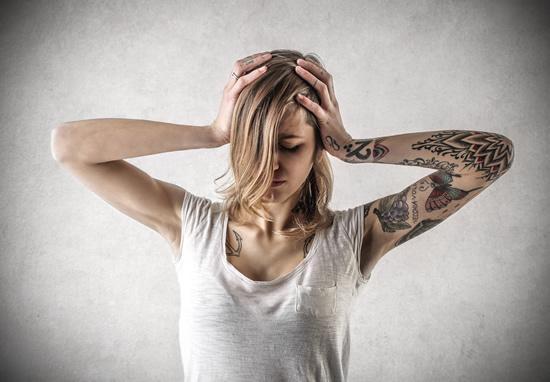 When she was 20, Angela Calisti and a friend entered a tattoo shop with the intention of getting matching butterfly tattoos on their lower backs. Because the credit-card machine wasn’t working, only Calisti ended up under the needle. And thus began years of skin-ink-based regret for her.

“The day I first got the butterfly I absolutely hated it and wanted to get rid of it,” says Calisti, now a 29-year-old celebrity hair stylist living in Astoria.

She’s not alone. Over the past few months, several stars have reportedly been erasing their ink: From Khloé Kardashian, who announced this summer she was removing a back tattoo, to Victoria Beckham (Hebrew words running down her neck) to Eva Longoria and her lower back tattoo of a butterfly.

Tattoo rates have skyrocketed in recent years — about 20 percent of Americans have a tattoo, up from 13 percent in 2007, according to a Fox News poll from last year.

With that surge in popularity has come a surge in regret, and a boom in clinics that remove ink using lasers.

Julie Zuckerman, vice president of Manhattan’s Schweiger Dermatology Group, reports her office used to do about 10 consultations a week three years ago; now they’re up to 100.

“It’s a mix of millennials going to go get jobs and that being a barrier for them and also going into the Marines, working for the state police force and things like that,” she says.

Calisti started going to Schweiger about a year and a half ago to have her butterfly tat, and another on her shoulder of a fairy, erased. Having undergone six sessions, the ink has faded considerably. She expects her skin to be clear after two more.

The Laser & Skin Surgery Center of New York in Murray Hill has seen a 25 percent increase in the past year alone, director. Roy Geronemus says.

“Laser technology has been around since 1990,” he says. “It was a much slower process than it was now. There were many colors could not effectively treat until past two years.” New laser technology can break up colorful, intricate design that previously proved almost impossible to remove completely.

A lot of people think tattoo removal works by having a laser zap the ink off the skin; in reality, lasers are just used to break up the ink that makes a tattoo permanent. The heat of the laser breaks ink particles apart, making them easier for white blood cells to filter out.

“It’s like Pac-Man,” says Dr. John Adams, who treats 50 percent more patients than he did seven years ago at New York Dermatology Group. “It just eats it.”

The technology is still quite expensive for doctors’ offices. Removal prices vary depending on size and color, but can cost $400 a session, and most tattoos require several sessions. But removals that used to be spread across eight months can now be condensed into a single office visit, Zuckerman says.

That’s good news for a generation treating tattoos as temporary markings that they can change as trends evolve. A 2010 Pew research study declared “tattoos have become something of a trademark for millennials.”

As soon as she turned 18, Ashanti Rivers got back-of-the-ankles tattoos, inspired by her early feminist ideals, showing Ms. Pac-Man chasing down a man. Six years later, now that she’s enrolled in NYU for chemical engineering, she’s undoing what she calls a “not mature” decision. But she’s also planning on getting a Sanskrit tattoo on a visit to Thailand in January.

If you have any questions just email me at drg@wcorlando.com